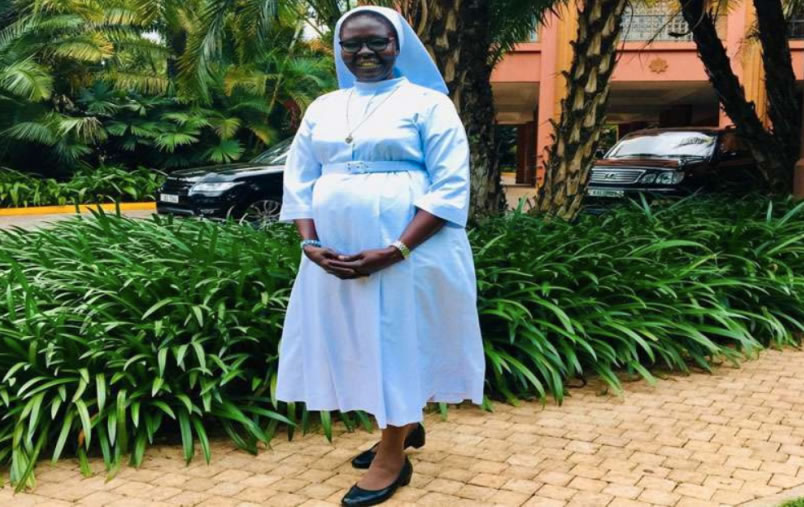 Last week, Monday, November 11, 2019, Pope Francis announced resignations and new appointments, he appointed members as well as consultors of the Vatican-based Pontifical Council for Culture, among them, is our very own from Uganda Sr. Dominica Dipio belonging to the Missionary Sisters of Mary Mother of the Church and a professor and head of the Department of Literature at Makerere University.

Sr Dr Dipio holds a BA in Education and an MA in Literature, both at the Makerere University in Uganda. In 2002 she obtained a PhD on women in African cinema at the Pontifical Gregorian University (Rome), where she also lectured on Introduction to Film Criticism and African Cinema.

The Pontifical Council for Culture is a dicastery of the Roman Curia charged with fostering the relationship of the Catholic Church with different cultures founded by Pope John Paul II on 20 May 1982.

“When the news of the Holy Father’s appointment of four of us, women, as consultors to the Pontifical Council for Culture became public, I felt truly humbled and honoured at the same time,” Sr Dipio is quoted by ACI Africa as saying on Monday, November 18 referencing the appointment of three other women to the same Council, namely, the Loreto Sr. Patricia Murray, Sr. Mariella Mascitelli of the Sisters of the Divine Master (P.D.D.M), and the French lay, Ms. Maud de Beauchesne-Cassanet.

Sr. Dipio added, “Deep within, me, Mary’s Magnificat stirred as I recognised God’s favour upon me, in entrusting me with this responsibility.”

“The announcement came a day before I published an online article on African proverbs on motherhood. And so, when the outpouring of congratulatory messages started flooding my mailbox, I obviously thought they were for my article,” the member of the Missionary Sisters of Mary Mother of the Church (MSMMC) recalled the events of the beginning of last week.

“I had to ask one of my friends from the U.S. what he was congratulating me for. He simply sent me the link. That was how the overwhelming news explicitly reached me,” Sr. Dipio shared.

Sr. Dipio expressed her gratitude to Pope Francis saying, “I thank the Holy Father for this trust, and I look forward to meeting my colleagues.”

Her Uganda-based Religious Order shared her sentiments of modesty and thankfulness through a message widely shared on WhatsApp.

“The Missionary Sisters of Mary Mother of the Church, Lira Uganda are humbled that their Sister Dominic has been entrusted with such responsibility by the Holy Father. May the Holy Spirit guide the team appointed,” reads the message from Sr. Dipio’s congregation, headquartered in Lira.

“My prayer is that we may render dedicated service to the Universal Church, in this capacity,” Sr. Dipio who holds a doctorate in Women in African Cinema from the Rome-based Pontifical Gregorian University concluded.

From Africa, Pope Francis also appointed Archbishop Gerard Tlali Lerotholi of Lesotho’s Maseru Archdiocese as one of the members of the same Roman Curia dicastery that has the responsibility of fostering the relationship of the Church with different cultures across the globe. Others appointed as consultors include Msgr. Tamas Toth who is the secretary of the Hungarian Episcopal Conference, Dominican Fr. Eric Salobir, Fr. Paolo Bennati, a Third Order Regular Franciscan, Professor Roberto Battiston, Professor Stefano Paleari, and Dr. Daniele Pasquini, national President of Italian Sports Centre.

Founded by Pope St. John Paul II in 1982, the Pontifical Council for Culture traces its roots back to the Second Vatican Council when the Council fathers through their Pastoral Constitution ‘Gaudium et spes’ stressed the need for the Church to place itself before the various cultures arising in the modern world.

In 1965, Pope St. Paul VI created the Secretariat for Non-believers, which became the Pontifical Council for Dialogue with Non-believers.

In 1993, Pope St. John Paul II through his Apostolic Letter “Inde A Pontificatus” combined the Pontifical Council for Culture and the Council for Dialogue with Non-believers into one Rome-based dicastery.

In 2012, Pope Emeritus Benedict XVI issued the Apostolic Letter “Pulchritudinis Fidei” joining together the Pontifical Council for Culture and the Pontifical Commission for the Cultural Heritage of the Church.

We congratulate Sr. Dominica Dipio and the Missionary Sisters of Mary Mother of the Church (MSMMC) on this appointment by the Holy Father. May the Holy Spirit guide her through this new mission.

More in this category: Fr. Ruffino Ezama first African to be elected Provincial Superior of Comboni Missionaries in North America »

Make sure you enter all the required information, indicated by an asterisk (*). HTML code is not allowed.