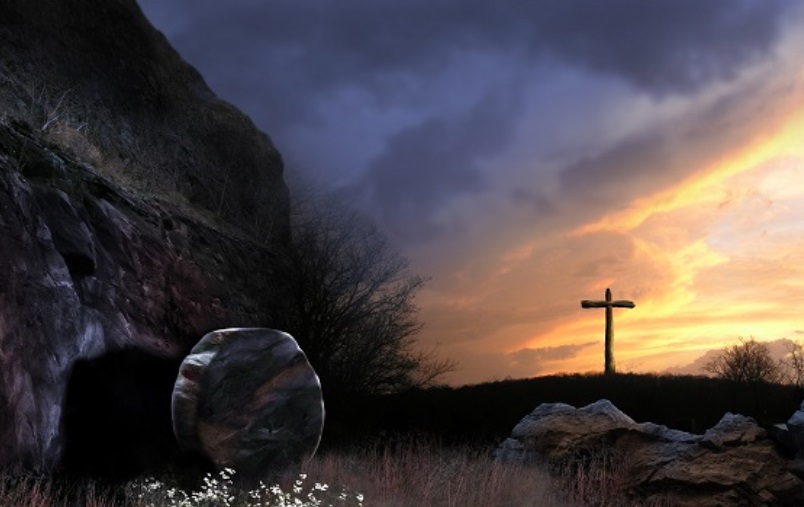 Since Ash Wednesday, today we climax into the joy of Easter Sunday. The Holy Bible narrates that after His crucifixion and his hasty burial; members of the Sanhedrin received shocking news that the itinerant teacher and healer was alive and his tomb had been found empty, while others were spreading news that  Jesus had appeared and talked  to them.

At that, the Jewish official sighed softly. And so indeed it was; the resurrection of Jesus Christ marked the beginning of a new era centered on the truth that Jesus had fully died was now alive. By virtue of His victory over sin and death Jesus’ resurrection had changed forever the way humanity looked at death, life, the world and at one another. The reality of Easter is that God is not simply up above; He is among us confirming that ‘life begins when it seems to end’.

When Luke wrote Acts of Apostles in the 80s AD., the key protagonists of his reflection, Peter and Paul had already died. But Luke chose not to mention the end of these two heroes; instead he put his audience in the impression that the ministries of Peter and Paul were still intact and that the Apostles continued to speak and guide believers. Calling Luke the first ‘historian’ of the Church, Josephus suggested that Luke’s literary style aligned him with great historians like Flavius and Tacitus who documented ancient history in the style of Herodotus and others five centuries earlier. Like them, Luke presented ‘an orderly account’ of the events pertinent to the early Church. Whereas the pattern they sought arose out of the interplay of the human decisions, Luke offers an insight into God’s plan who offers true salvation to all people. Luke confirms that Jesus’ death was in accord with God’s foreordained plan and His rising had been foretold by scripture. To make the situation better several witnesses saw him in his risen state.

In Acts Paul presents the WORD intended for gentiles while Peter focuses on Jews. In this reading however, Peter is portrayed preaching to gentiles. Luke’s intention was to present Peter as the recognized head of the Church. For Luke both Jews and Gentiles are united by faith in Christ and can no longer be separated by ethnic differences or rules of clean/unclean. Moreover, Peter’s message represents the fulfillment of the mandate Jesus had issued insisting that good news of forgiveness and salvation should be preached in his name “to all nations” Luke 24:47. After Jesus’ resurrection, Peter and Jewish Christians realized that the universal truth about salvation was that “everyone who believes in him has forgiveness of sins through his name” Acts 10:43. This truth was clear in the conversion of the gentile soldier by names of Cornelius/Col. and of his whole household. Given extensive coverage by Luke, the Cornelius event became a landmark for the early Christian Community which acted as model for all those embracing the Gospel. Jesus’ resurrection was a sign that all flesh has been loved and transformed by God’s love. What was fundamental in life was genuine love, not who we are.

Due to the advances in medical science, particularly in the latter half of the twentieth century, a phenomenon known as the ‘near death experience’ has become a commonplace. Victims of heart attacks or other serious physical trauma who would otherwise have died, can now be resuscitated and go on to live normal lives. Many, who have survived such an encounter with death, have said that their lives were radically altered by the experience. Values and priorities were adjusted. People and relationships became more important than things. The details of life which had previously received so much effort and attention faded into insignificance in order that truly essential aspects of human existence are better attended to.

St. Paul reminded the Colossians to remember that through baptism they had died and rise with Christ to a new life of grace and glory; an experience that radically alter our life-style such that our hearts are set “on what pertains to higher realms and on things above rather that on things of earth” Colossians 3:1, 2. One of St. Paul admires called Epaphras had founded the Church at Colossae, Laodicea and Hierapolis. Paul also had ties to these cities through his relationships with Philemon, Onesimus, Apphia and Archippus. When there was need of clarity, Epaphras asked Paul for support. Even if Paul had these strong connections, still, false preachers plagued Colossae and the surroundings attacking both the supremacy of Christ and his true humanity while offering in its place a combination of pagan astrology and a peculiar form of Jewish mysticism. Lest they be swayed by these errors, St. Paul the reminded Colossians that their baptismal commitment to Christ obliged them to be renewed daily in the death and resurrection of Jesus. Only the resurrection of Christ can offer a sustainable conviction and faith.

One of the key doctrines of the Christian faith and one of its greatest mysteries is the resurrection of Jesus. Fortunately, St John the evangelist provides a guide to assist us understanding better this mystery. The beloved disciple John son of Zebedee was not just a historic person but a symbol of the true disciple who remained close to Jesus and was the first to believe in his resurrection. John was well known in royal circle of Jerusalem cf. John 18:16 and the beloved disciple who was nearest Jesus at the Last Supper. John remained at foot of Jesus’ Cross with Mother Mary and was entrusted by Jesus with her care. He was with Simon Peter when Mary of Magdala brought news of the empty tomb. First to arrive at Jesus tomb, he saw and understood what Mary had not. While she thought that Jesus’ body had been taken, John realized that by the orderly arrangement of the burial cloths, Jesus’ body had not been stolen but He was indeed risen and he believed. His faith was less a result of human effort and understanding but an effect of Christ’ love for him. Later, while fishing with Peter, the beloved disciple would recognize the resurrected Lord standing on the shore and point him out to Peter.

In concluding his gospel, St John the evangelist identified the disciple Jesus loved as the authoritative source of his work. Like the angel interpreters in Matthew 22:5, Mark 16:5 and Luke 24:4 of the synoptic resurrection narratives, the beloved disciple helps us to sort out the mystery of Jesus’ resurrection and come to faith. The lesson for us is that love for Jesus gives one the insight to detect his presence. The Beloved Disciple, here as elsewhere the ideal follower of Jesus, sets an example for all others who would follow. As our model and Easter guide, this loved disciple calls us to consider and rejoice with him in the mystery of God’s love for us incarnate, crucified and risen. For Jesus we need to be the loved disciple. For this to happen, we need to leave our tombs empty. Corruption, embossment of public funds, wild political ambitions and materialism should seize because the tomb is empty. Addictions, false attitudes, wrong choices, attachment to evil, appetite to commit crime have to end. Let the tomb that is holding Ugandans hostage be empty. To reinforce the reassurance of the empty tomb, I conclude with an ancient story. After committing suicide for betraying Jesus, Judas found himself in pitch-black darkness at the bottom of an endlessly deep pit. After weeping for a thousand years in sorrow for his sinful betrayal, and now empty of tears, he looked up only to see a tiny speck of light way up at the top of the pit. After hundreds of years of contemplating that tiny glimmering glow, he attempted to climb up toward the light for many years struggling to scale the slimy, slippery walls of that pit. Finally, after several attempts, he was able to crawl inch-by-inch all the way up to the rim at the top. Climbing out of the dark pit, he found to his surprise that he was in a luminously brilliant room where twelve men were seated at a long table. ‘We’ve been waiting for you, friend Judas, said Jesus, who was seated at the far end. We could not begin to eat until you have come’. This is to demonstrate how much God loves us. We may not care about our life and salvation but God in Jesus who is the source of all we are, cares that we are well and safe.

Dear Ugandans and all people of God, this Easter Jesus waits for all of us with just as much patience and healing love. All we need is the conviction of Cornelius and his family, then the resurrection of Jesus Christ will be our support and we shall become the other disciple. Let us climb towards the light of life. Jesus is waiting for us today. I wish you a happy Easter 2020.